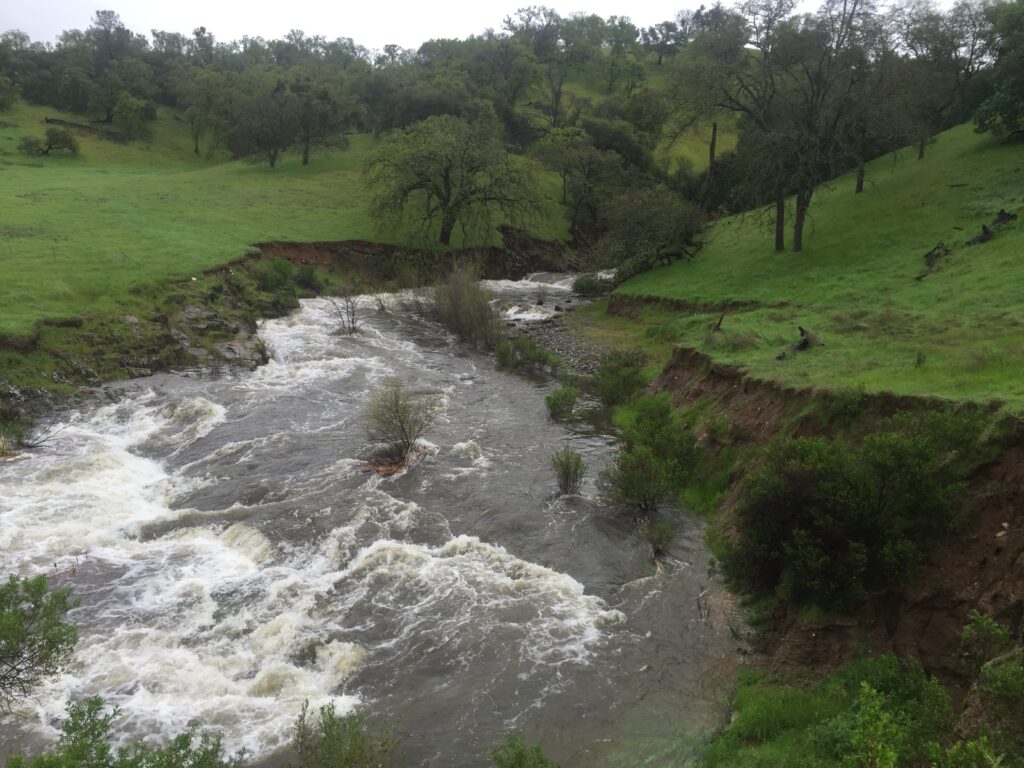 Twas the morning for fishing and all through the lake, not a lure was stirring nor artificial or live bait.  The rods were all hung over the water with care in hopes that the fish plant, soon would be there.  The anglers were waiting all snug in their waders while visions of Cutbows tempted the baiters.  When up on the Dam there came such a clatter, I sprang from my seat to see the fish planters.  Away to the water I flew like a flash, casted my rod and got a backlash.  When, what to my wondering eyes should appear, but a school of large trout swimming right by my gear.  I detangled my line, so lively and quick, for I knew in a moment that I might get a hit!  And then, in a twinkling, I felt a large tug on my rod as a brute of a Donaldson took my power bait clod.  I yanked and I pulled with all of my might in hopes that I could keep that fish in my sight.  When up from the depths came a huge snow white belly as it danced on the water like a bowl full of jelly!  It was chubby and plump, a true trophy trout, and I laughed when I saw him for I had my net out!  Overwhelmed by a proud feeling as it lay on the shore, I shouted to all ” I love Lake Amador”

Well December is off to a great start with Johnny Sousa and his buddy each landing nice 5 1/2 pounders one of which had a Derby tag in its tail worth two nights camping, way to go Johnny!  We also ran into a nice group of fishermen and that had a great stringer of fish with one that also had a winning Derby tag attached to it, unfortunately I was not able to get the details of what the tag was worth 🙁 but I’m sure it was worth more than the entry fee.

I had some successful fishermen let me in on some key info that helped them to land a nice limit of trout while trolling the main body of the lake on 12/9.  They said that nothing was working, they had tried everything in their tackle box until they began dragging fire tiger broken back Rapala’s over the main points at around 5′ deep.  They had a 10 fish limit within a few hours and were on their way to the fish cleaning rack, check out the live well in the picture.

Take a look at this beautiful 11 pound lunker caught 12/9 by Brian Smithey out of Elk Grove, he enticed this monster with a chartreuse Power Worm off the Dam. 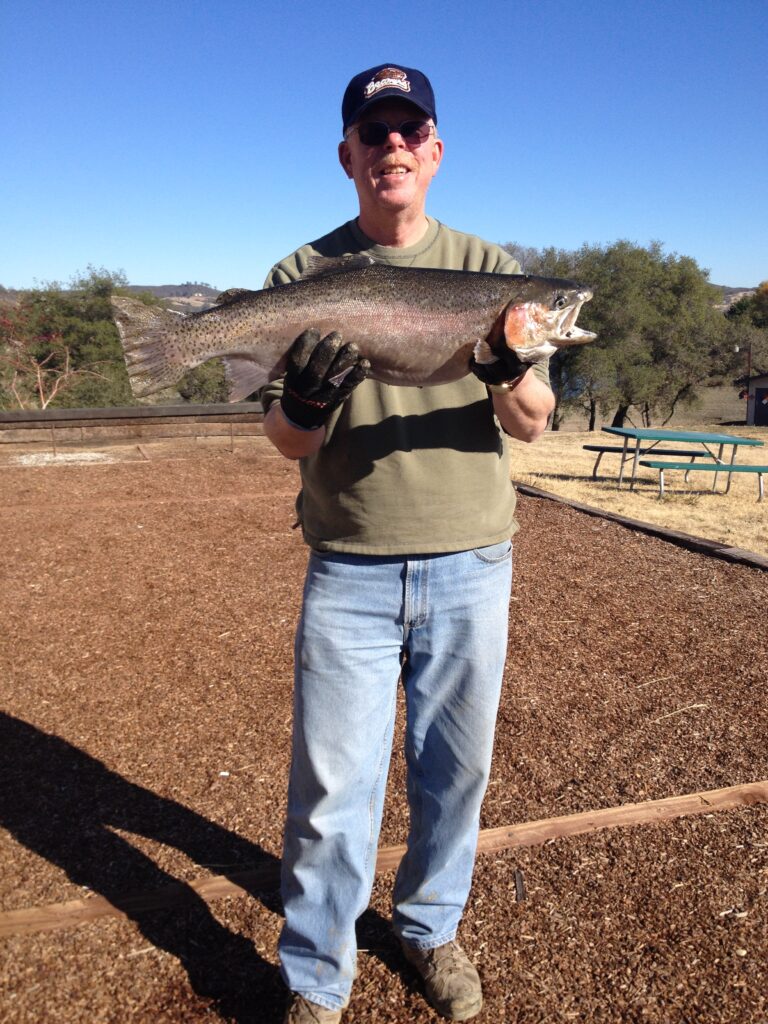 12/13 – Tagged Derby Trout have been flowing in all week with anglers claiming prizes ranging from a jar of Power Bait to 2 nights camping.  I will say that we have already stocked the two tagged trout worth $100 and they are still out there so the odds get better every day.  We have been seeing lots of limits of fish especially as the recent cold snap reduced the surface temp of the lake.  Most anglers have stated that the bite is red hot when using lures such as Kastmasters, Uncle Larry’s Spinners, and Firetiger Rapala’s.  Bait fisherman are also doing well just as long as you stay 5′ deep or less and keep it close to shore.  Our current lake level is at 55′ from full which is a unfortunate result from our lack of rain in Northern California so if anyone knows a good rain dance or can possibly seed these clouds overhead it would be much appreciated.  That said, be careful on your treks to the waters edge and please don’t let it discourage you from coming out.  For every foot down there is more fish per gallon of water to catch and we have increased our fish plants to 400lbs per day so its not hard to limit out by noon.

On the left is Brian Smithey of Elk Grove again with two nice fish one 5lbs and one just under 5lbs, he caught these on 12/17 off the Dam with white Power Worms.  I guess if you need some good advice on catching these trout around here go find this guy on the shoreline and bribe him with some free worms or something :).  The right photo is Carl Kropp out of Sacramento who on 12/17 brought in a nice stringer of trout including a 5 pounder with a tag in it worth a free day use, another nice catch off the Dam with Power Bait.

12/22  There is a definite trend of limits being taken by trolling a  J7 Firetiger Rapala, even bank fisherman have been lucky using this lure.  We have finally started seeing some of those huge trophys we stocked back in November, I attribute the change to all the cold weather we have been seeing lately.   The surface temps are dropping even further below 60 degrees and all these Cutbows are riding in the top 5′ on a regular basis now.  If your fishing from shore, find the little pockets and backs of coves or fish right on main points where they seem to be congregating,  study the shore before picking a spot and watch where you see fish getting caught to improve your odds.  Bait choice and line strength is another big part of the picture as well,  Ask Ernie Green from Elk Grove.  He had a hard time getting anything all morning until our own Donald Hamilton (left picture) gave him some tips and some bait as well, including some white power eggs, and regular old crappie jigs.  Two hours later he left with this nice limit (center picture) and a grin from ear to ear, nice to see another successful fishing trip I must say!  Back at the clubhouse on the same day we found this gentleman, Valeriy Zagaraychuk (right picture) with a nice limit he caught on chartreuse Power bait near the Dam.  His whole stringer had a total weight of 18lb for five fish with the largest at 7.62lb.  The 20th was a great day for fishing! 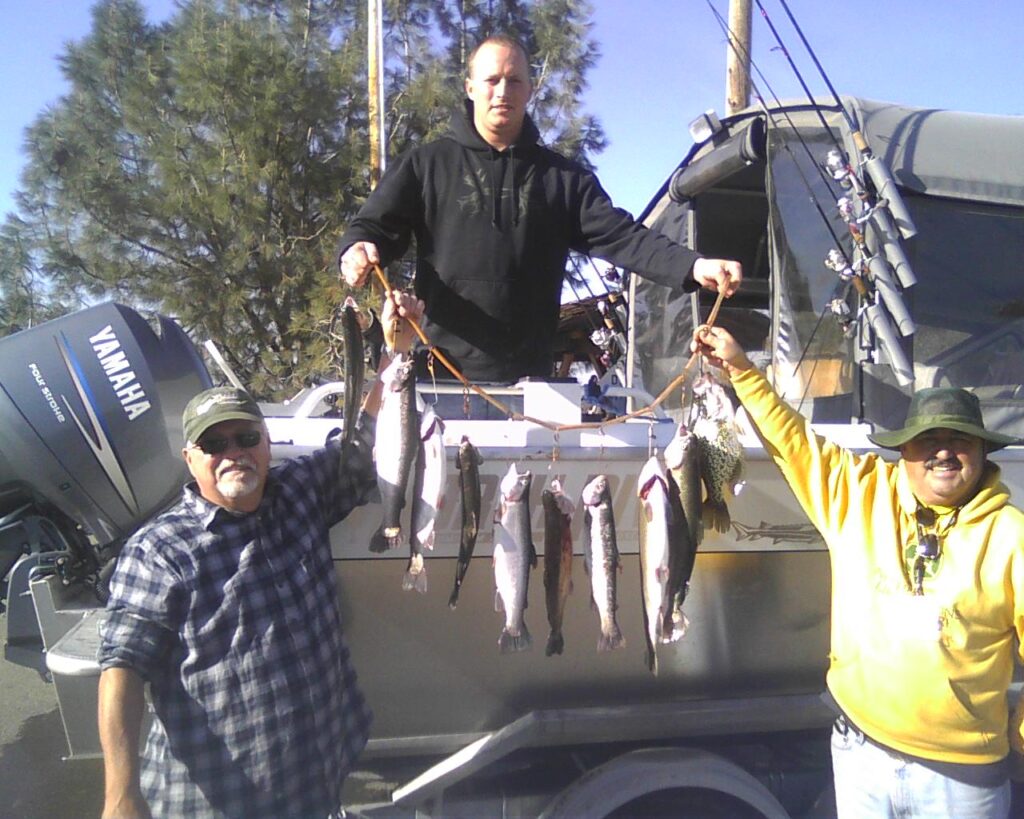 Monte, Robert and Jeff from the Sacramento area proudly display a nice haul they caught on Saturday 12/21.  The caught all their fish trolling Rapala’s and even hooked a 2lb crappie as well. Nice job guys! 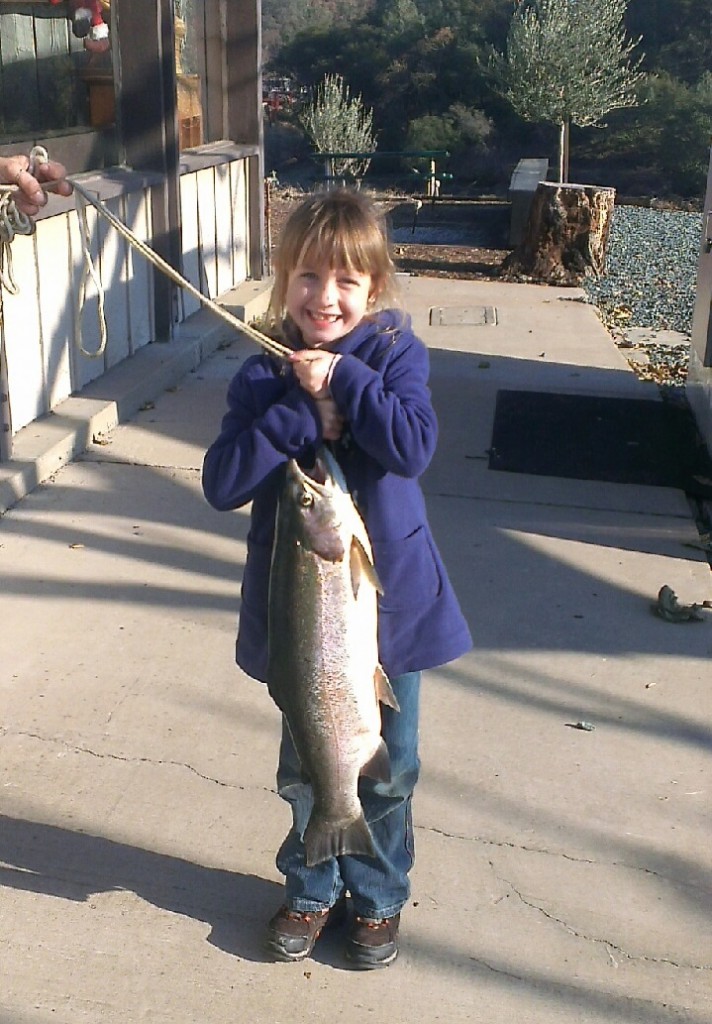 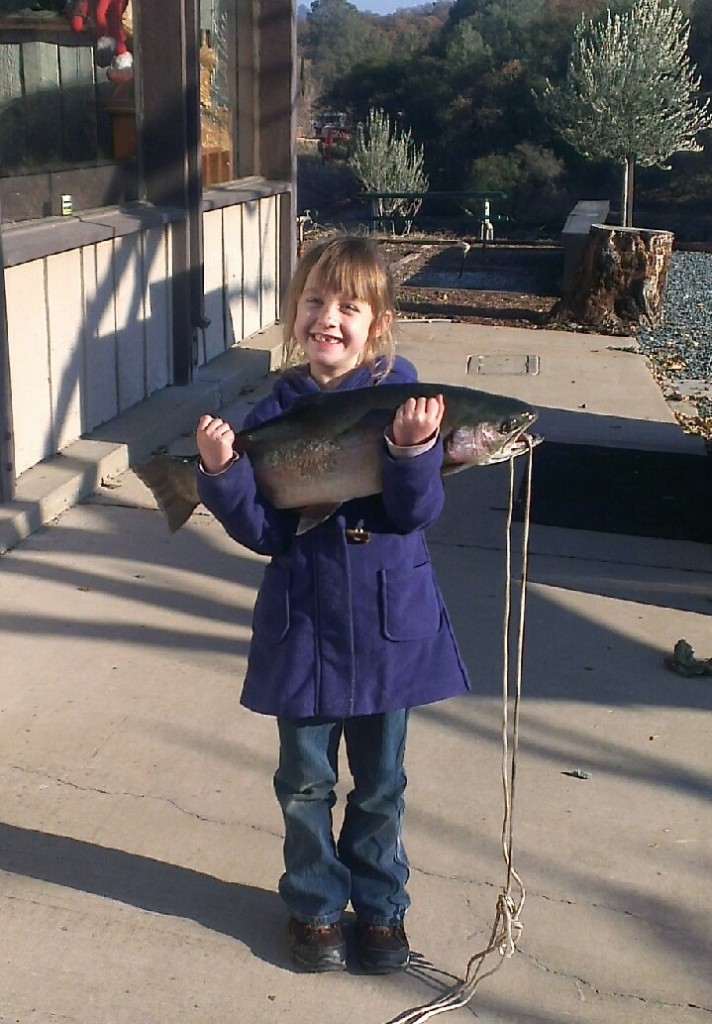 6 year old Valerie Rice from Somerset, Ca landed this monster 10.7lb Amabow while trolling orange grubs in Jackson Creek.  I would have to say this little one had the fight of her life getting this one to the boat!!!

Topping the scales for the day was George Mendoza’s 16.24lb toad of a trout.  He stated that trolling a J7 Firetiger Rapala worked well today and helped him to entice this fish near the mouth of Cat Cove.  Great job George You’ve earned bragging rights on big fish so far this year!

Good luck fishing and keep checking back for more updates, we see nice stringers everyday!  Don’t forget to purchase your Derby ticket for $7 in the clubhouse, its worth the investment considering there are 300 prizes out there all worth more than the entry.  Plus at the end of the Derby on February 23, 2014 there will be a drawing for (2) $500 winners that will be drawn out of the tags that were caught by registered fisherpeople, not bad odds if you ask me!