We stocked our first load of trout on October 22nd 2015 with a weight of 4000lbs to get the season under way. So far we have stocked a total of 12,900lbs. Check out our stocking totals page for more details. With the lingering drought many trout rearing facilities have closed down including our own and getting trout has become quite difficult for many lakes in California.  Luckily we were able to secure the same 40,000lbs from Lassen we stocked last year so the fishing should be great. 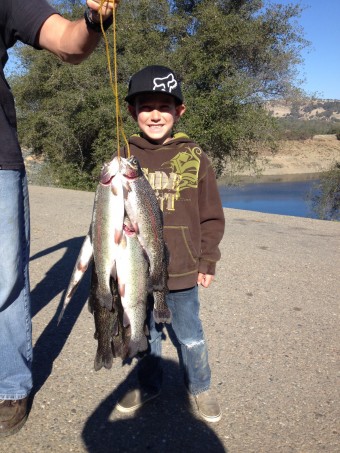 By boat try using lead core line and flashers with a nightcrawler, curly tail grub, or needlefish.  Run your rig between 25-40′ deep at a slow troll and try focusing on the east side of the lake especially in Jackson Creek.

By Shore:  Try floating powerbait or a air injected nightcrawler off the bottom with a splitshot and a 3′ leader at the 25-40′ depth.

Night fishing off the big blue dock is off the hook, I hear that most everyone is leaving with their limit after the sun sets.  Don’t forget that the boat house is now open to the public so if you need to get out of the cold or away from the bugs feel free to take refuge inside.

Welcome amador anglers, in here you will find information on our current stocking program for the 2014-15 fishing season.  Lake level is currently at 10 feet from full and 75% of capacity 🙂 🙂 🙂 We are now stocking Lassen Shastabows and LIGHTNING TROUT once weekly!!!!

PLEASE REMEMBER THAT THESE FISH ARE ABOUT TO SPAWN (BREED) SO KEEPING THEM SEVERLY HURTS THE FUTURE POPULATIONS IN THE LAKE.  IF YOU CATCH A CATFISH OR BASS DURING THE SPRING MONTHS CHANCES ARE IT IS FULL OF EGGS AND TRYING TO MAKE BABIES SO PLEASE PRACTICE CATCH AND RELEASE TATCTICS TO PROTECT OUR FISHERIES.   THESE TIPS ARE INTENDED TO HELP YOU CATCH MORE FISH SO PLEASE BE RESPONSIBLE WITH YOUR STRINGERS!

Catfish are being caught all over the place, Ive seen a fly fisherman catch a 26pounder in a float tube, and others land an 8lb lunker on a nightcrawler in the back of cat cove.   I would say that the cats are filling up while they can and on whatever they can find.  I would be aggressive even fishing in the middle of the day.  Chances are if you catch one your in for a long haul considering they usually school up during this period to make hunting more productive.  I would fish shallow 15′ or less with chicken liver or anchovies, try the backs of cove especially on the north side of the lake.

Bass are coming out in hoards while using plastic worms on main points and underwater islands.  Try fishing the sandbars in Jackson creek with big dead ringers at 15-20′ and you may get a big surprise.  I would assume that they are on beds or getting really close as the surface water temps are almost at 70 degrees.  I usually start running spinner baits around moss beds in the month of May but it may still be a little early for that.

The location could not be found.